Randomness 🌱
Everyday is a good day to try something new. #piccolo @theburrowuae
🪴🌱🌿
Morning❣️
Happiest birthday Ann❣️ Miss you and love you💕
I look up and I see - only the good things.
Day before Christmas 🎄. Hope everyone will have a very merry one!
When everything else just falls into place. #myspace
Sunday hustle.... .
My office today🙋🏻‍♀️
TOKS
Hello from the other side! 🖐🏼 #ilovesharjah #alqasba

Amna was good at memorizing faces.

At the age of forty five, her health was the best it could be; mentally and physically. Eating right really does do you good, especially in the later years and lots of exercise. Amna herself took morning yoga classes every Friday, and afterwards had a relaxing lunch at On The Wood, a cafe that was halfway from the gym to her flat.

On The Wood had been around a long time, and Amna had been going there as long time; so much so the staff knew her favorites and could just tell which among them she would choose depending on the mood she was in when she entered. And, of course, she knew them too and knew almost everyone who’d come in more than once.

So she will know a fresh face when she saw one.

“Welcome to On The Wood!” The staff greeted when a girl, college age or maybe younger, pushed past the glass doors of their café. Friendly and welcoming, the people here always were, which was one of the reasons why it’s a favorite hangout.

The girl shyly smiled back, obviously surprised by such a warm greeting and quickly crossed the room to find a table. Amna didn’t mean to be watching her but there was something about her that seemed different. A majority of girls her age came in here in groups or with boys and if they did come alone there was always a certain aura, a kind of similarity between them that told of bold and adventurous city girls who weren’t afraid of anyone. But this girl who came in that day was too, timid, too sweet to be from the big city and the poor dear looked almost scared.

She must be from somewhere far.

When the young girl picked up the menu, Amna remembered that it actually was rude to stare and so she went back to her own business, reading the newspaper which is always accessible since her favorite space is right beside the rack. But curiosity got the better of her and out of the corner of her eye she watched as one of the waiter’s went away after receiving her order and left the girl who pulled out a book. And if that wasn’t surprising enough, Amna actually recognized the cover; Orwell’s “1984”. This girl had pulled out a classic, not some romance novel and not her phone.

At that point Amna was debating whether to come over to this girl and start a conversation. This was the kind of person that seemed to be easy for Amna to get along with.  Someone deviant from her generation, didn’t adhere to their selfie-taking, social media obsessed culture. She was ready to stand and introduce herself until the waiter from before came back carrying a delectable shawarma sandwich and laid it out for the girl on her table and then, to Amnas utter disappointment, the girl pulled out her phone and began to take pictures of her food.

Amna felt like a child who’s balloon had been popped.

Of course, this girl was just like all the rest. Maybe a little different but still an attention and approval seeking millennial.

When Amna left the cafe that day she couldn’t help the disapproving look that she cast in the young girl’s direction.

Mona was her name.

Over the course of the past three months, young Mona would be there every Friday at noon like Amna and the staff loved her already.

Amna noticed that she always left a tip, always said her hellos and goodbyes, complimented people and even picked up things the staff dropped without hesitation. She was such a good girl.

If only she didn’t have that peevish food photography habit.

Amna really didn’t get the point. Wouldn’t it be better to just have your food rather than waste whole minutes looking for the perfect angle or lighting just so you could get “Likes” or hearts? Where did that silliness start anyway? And how could such a lovely girl have picked up the horrid habit?

On the first Friday of the fourth month since Mona started coming to On The Wood, the place was packed. Understandable considering it was summer, everyone is on holiday  and tourists from all over would be coming to sample the cafe’s fine fare. Amna even recognized some old faces she hadn’t seen in a while, and definitely recognized Mona’s face when she came into the café and frowned slightly when she saw how full the place was.

“Hey Mona.” A lady behind the counter smiled at her when she entered. “The usual?”

Mona had nodded but reluctantly, her attention on the bustling establishment. She looked around and for a second Amna met her eyes before Mona’s focus shifted on the empty chairs at Amna’s favorite space.

Amna pretended to have not been paying attention as Mona approached shyly, her head ducked down while her big brown eyes regarded Mona respectfully. “Excuse me, ma’m.” Her smile was as sweet and endearing as ever. “Do you mind if I sit here with you?”

“Not at all.” Amna gestured to one of the empty seats and Mona reluctantly settled into the one across from her.

Amna just smiled and went back to her paper and, predictably, Mona pulled out another book, Shakespeare this time. They read in silence that was most definitely more awkward for her than it was for Amna and for a while, nothing was wrong. Until a waiter came by with Mona’s food and her phone was again taken out.

It was difficult to fight the frown that made its way onto Amna’s face. She bit the inside of her cheek as she watched Mona routinely take pictures of her four cheese pink sauce pasta, trying to keep her comments and thoughts to herself until she just couldn’t hold it anymore.  “Where do you post those, dear?

Mona looked up from her phone, momentarily stunned and unable to reply with anything other than “What?”

“The pictures, dear.” Amna pointed to her phone where the image of her meal was already processed. “Where do you post them?”

Mona seemed to catch up and shook her head. “Oh no, I don’t post these anywhere.” She shyly tucked her phone away. “I send them back to my family.”

“Your family?” Amna set down her paper. “You don’t live with your family?”

Mona smiled sadly, shaking her head. “I’m from the Beirut. It’s pretty far but the university I got a scholarship for is here so I’m in the dorms now.” She fiddled with a lock of her hair, avoiding Amna’s eyes like she was afraid she might thought ill of and immediately a twinge of guilt twisted Amna’s stomach.

“It’s silly.” Mona smiled down at her lap but it isn’t her usual, sweet smile. It’s sad, sentimental, the kind of smile you had when you missed someone dearly and thought of them fondly. “But I’m used to having lunches on Friday with all of my family and while I was looking around for somewhere to have lunch I saw this place. Food is great so I kept coming back and I send my family pictures so it would still kinda be like eating together.” Once the words left her mouth, she flinched slightly as if she was embarrassed to have said those things out loud.

She looked up at Amna with those big brown eyes. “Is that silly?”

And she meant every word.

Work is rough, life is tough, and the heat doesn’t help.

There are times in your subconscious you tell yourself , if you can… drop whatever you’re doing right now.

You’ve left the office, gone down the elevator and out the doors. You’re walking through the parking lot, the sun beating down on you, burning and shining bright overhead. No one else is out, except the guards watching the lot; everyone is at work back in the building. You could’ve felt guilty about that but you didn’t. You’re fingers reach out and brush the smooth spiny leaves of the plants lining the parking lot in their cement plots.

You ponder on getting in your car and driving somewhere when you reach it but then you remember the fee you paid lasted the whole work day; plus you could use the exercise. So you walk, the guard nods to you as you pass him.

You’re in no rush. You’re enjoying the semi-fresh air and taking in the sight of the two buildings that are the same but different at the same time; faces and voices fade in and out.

You cross the bridge and from afar you see the old boats calmly parked in the canal down below.  It’s been there but today it’s like you’re in a trance appreciating the sight perhaps because you’ve been ignoring the beautiful scenery all along, spending so much time staring at a computer screen and office desk.

One thing’s for sure though, you’ve never been on that ferris wheel before.

The operator is just leaning on his control panel, looking bored out of his mind. You can see some of the carriages have people; mothers with their children, teenagers, young couples.   I am the minimum must be reached for the the ride to be started. You can’t remember the last time you rode a ferris wheel so you approach the operator and pay your fee. You’re carriage is clean, the only kind of blemish in the interior being the speckles of dirt on the white flooring. 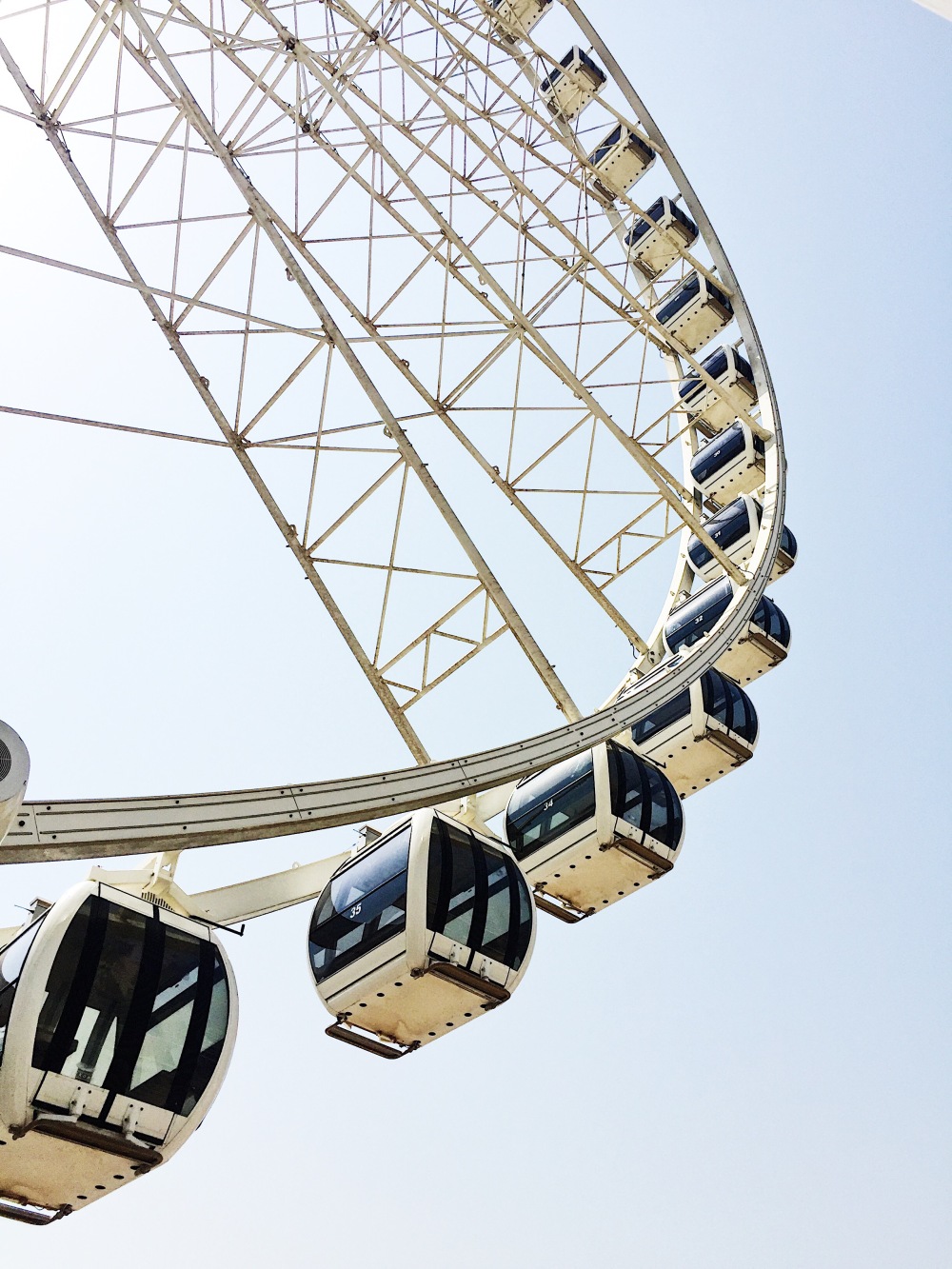 The world is beautiful at the top. You’ve reached the same height of the surrounding buildings but seeing the world below you and people appearing as ants and trees as dots of varying green shades, it’s breathtaking.

The air is better up there, cleaner.

Then your stomach drops when you look down.  It will end soon though.

When it does you thank the operator who looks surprised and then smiles.

You walk away feeling refreshed. You continue down a path on the bridge, back to work.  Glad you chose a good day to take that spin.